The country where I quite want to be.

Once again Finland comes first in the annual slightly silly game of which country is the best. This time around Newsweek have produced a neat little interactive infographic to summarise all the rankings. Countries are ranked on five dimensions (education, health, quality of life, economics and politics) These numbers are summed together to give the overall score. 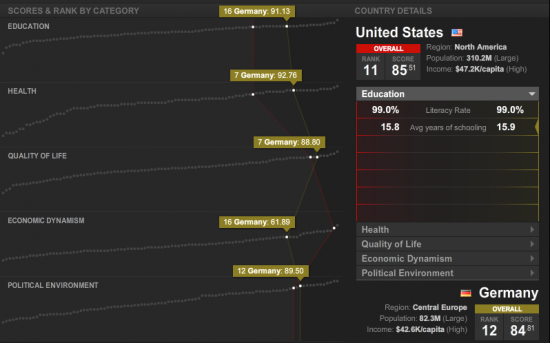 Naturally, it is a just a number but in the field of education at least i don’t think it is any coincidence that Finland consistently beats the rest of the world on all measures of educational excellence. One of the most inspiring talks I’ve ever heard was on this subject. Given by Pekka Räsänen, Niilo Mäki Institute, University of Jyväskylä, Finland to a meeting of the UCL Centre for Educational Neuroscience, he mostly discussed how to bring children with learning disabilities into the system but started his talk with a little bit of boasting about Finnish education.

1. Finnish children start school at seven years old.
2. Educational spending per student is low but results are phenomonal
3. There are no programs for gifted children. Likewise children with learning disabilities are mostly taught in mainstream classes.
4. Class sizes often approach 30.
5. There is no postcode lottery nor any private schools. Children go to their nearest school.
6. There is a core curriculum but teachers have huge freedom about how they teach it.
7. Being a teacher is a respected profession and most teachers have a master’s degree.

(I am not an educationalist but) I’ve long thought that annual league tables and overly rigid national curriculum rules are very deterimental to the goals they are intended to promote. Finland seems like good evidence in favour of this. If there’s any more evidence out there, i would like to see it.

Caspar is just one monkey among billions. Battering his keyboard without expectations even of peanuts, let alone of aping the Immortal Bard. By day he is an infantologist at Birkbeck Babylab, by night he runs BabyLaughter.net
View all posts by caspar →
This entry was posted in good and tagged Finland, Finnish Education, Infographic. Bookmark the permalink.