I wonder what he was praying for?

No, this isn’t some fancy Photoshop trick, these are real human footprints ingrained in a hardwood floor. 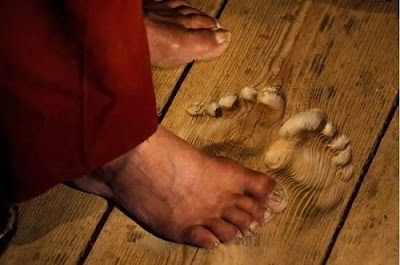 70 year-old Buddhist monk Hua Chi has been praying in the same spot at his temple in Tongren, China for over 20 years. His footprints, which are up to 1.2 inches deep in some areas, are the result of performing his prayers up to 3000 times a day. Now that he is 70, he says that he has greatly reduced his quantity of prayers to 1,000 times each day.

via World Of Technology: Leaving Your Mark.